Brunch in style with this delicious and flavorful Apple Cinnamon Dutch Baby. Perfect for feeding and wowing a crowd and made in just 30 minutes!

I realize it’s no longer apple season, but if your like my household you eat apples year round. One thing I’ve craved this pregnancy is apples. Like all thing apples–and I guess it’s a good thing that we went apple picking back in October when we were in North Caroline because it fulfilled all my apple cravings for at least a few weeks. One recipe I found myself making often was this Apple Cinnamon Dutch Baby.

If you’ve never made a dutch baby you are in for a treat. It’s actually really easy to make and best of all it’s a one pot style meal. You cook the apples in the skillet, then remove them from the skillet, wipe it clean and heat the skillet in the oven. The key is a very hot skillet. While the skillet heats in the oven you’ll make the batter. I place the semi-cooked apples in the skillet and then add in the batter. Back in the oven it goes for about 15 minutes until it’s puffed up and golden brown and then it’s done. A cast iron skillet is key for a delicious dutch baby. You have to cook the dutch baby on a high heat and that’s why a cast iron skillet works best. Plus, it holds the heat best as well.

Once the dutch baby is out of the oven, I love to top the dutch baby with powdered sugar. I love my OXO sugaring wand. I use to use a small mesh strainer to sprinkle my powder sugar and it would get everywhere. Last year I discovered this sugaring wand and it changed my little sugaring life. Seriously–it’s another must have kitchen tool!

If your looking to entertain, and entertain in style–or maybe it’s just you and the family. Make my recipe for an Apple Cinnamon Dutch Baby!

Disclaimer: There are affiliate links in this post. That means if you click and buy something from the link I will receive a small percentage of the sale–at no additional cost to you! 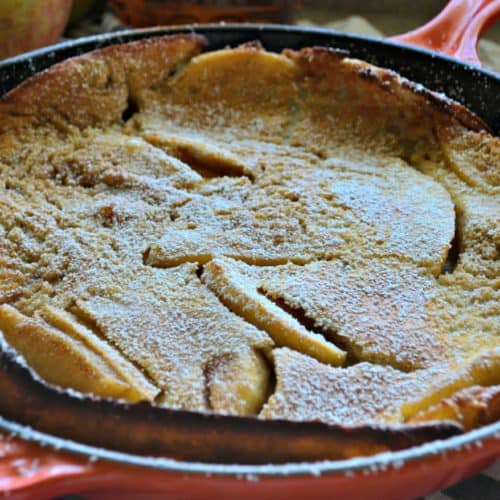