I’ve been wanting to share this recipe for Cranberry Apple Crostata since the fall. It’s been in my head since then–I didn’t make this crostata until last month. I had leftover pie crust from the holidays and figured what better way to use it up than to make a crostata. The first time I attempted a crostata I made my own crust. It was delicious, but I can honestly say that this Cranberry Apple Crostata was just as good and took half the amount of time! This is the perfect mix of sweet and tart. I wasn’t sure if my husband would like this and he totally loved it. I really thought I was going to be chastised for using fresh cranberries in this crostata. Not the case at all! 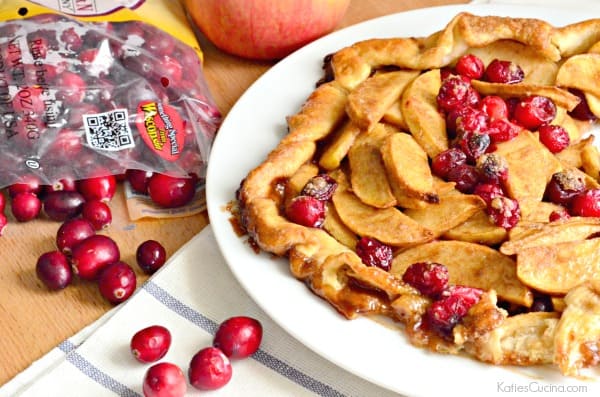 This is one of those recipes that you can serve as breakfast, as a dessert at brunch, or for an after dinner dessert! The day I made this I made it for breakfast. My husband loves, loves, loves a fruity pastry for breakfast. Now that we have the baby, I don’t always get to make him homemade breakfast. So I was happy to make this Cranberry Apple Crostata on the weekend and he was able to eat the leftovers the next couple of days for breakfast.

Don’t be intimidated to make a crostata. I promise it sounds way fancier and harder than it really is! All you will need to do is let the pre-made refrigerated pie crust get to room temperature. While that is going on, peal and slice the apples. Mix the apples into the sugar mixture and make sure that all the apples are covered with the sugar. Then you’ll want to carefully stir in the cranberries. Once the mixture is done your pie crust should be ready to roll out. Pour the apple and cranberry mixture into the middle of the pie crust and begin to crimp the edges so that it just overlaps into the apples by an inch or two. Brush it with a little egg wash and bake it until it’s golden brown. I’ve made this now a few times–it’s really important that when you crimp the edges you crimp them tight so that the sugar mixture does not leak out of the crostata. It’s ok if it does–it just won’t be as pretty! 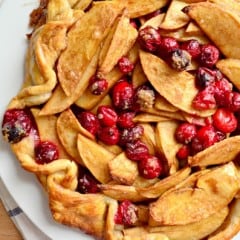 I love to make a crostata as it doesn't have to be as picture perfect as a pie. Feel free to make your own pie crust if you have the time!