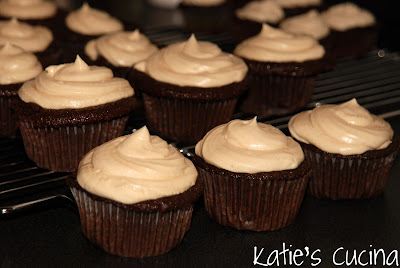 My husband and a coworkers husband brewed beer back in November, and in late December we had a preview tasting of the brew’s. They brewed an oatmeal stout and a pale ale. The following month we had a beer tasting with a few friends, and I was asked to bring a dessert. I racked my brain trying to figure out a unique way to incorporate one of the beers into my dessert. That’s when I remember that Annie had made a cupcake that contained Guinness. Since Guinness is a form of a stout I figured I could easily substitute that for our home brewed Oatmeal stout! I’m not going to lie–I’m not a fan of Bailey’s and since I knew there would be a few children at this beer tasting who would also want to indulge in cupcakes I made mini Chocolate Oatmeal Stout cupcakes with a cream cheese frosting. 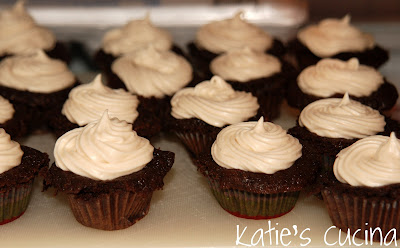 I mean, come on, who can’t resist a chocolate cupcake with cream cheese frosting? I know I can’t! I used this cream cheese frosting recipe for the mini cupcakes. After quite a bit of beer test tasting then followed by cupcake taste testing the vote was split. Those who LOVE Bailey’s LOVED the large cupcakes stuffed with a Bailey’s Chocolate Ganache and topped with a Bailey’s Irish Cream butter cream frosting. Those who just love chocolate and cream cheese LOVED the mini cupcakes. In the end we just about polished off all the large cupcakes and most of the mini’s. I made a dozen large Oatmeal Stout w/ Bailey’s Irish Cream cupcakes and I made easily 2-3 dozen of the mini’s! ON a baking note: Make sure you spray your pans very well with cooking spray, because the cake batter stuck to the pan. That or don’t over fill your cupcakes! You can even read a little more about the beer tasting at my friend, The Beer Guerrilla’s blog!
Source: Annie’s Eats
Prep: 15 minutes
Cook: 20 minutes
Serves: 24 cupcakes
Ingredients:
For the Guinness chocolate cupcakes:
For the Bailey’s ganache filling:
For the Bailey’s buttercream frosting:
Directions:
1. To make the cupcakes, preheat the oven to 350° F. Line two cupcake pans with paper liners. Combine the stout and butter in a medium saucepan over medium heat. Add the cocoa powder and whisk until smooth. Remove from the heat and allow to cool slightly.
2. In a large mixing bowl, combine the flour, sugar, baking soda and salt. In the bowl of an electric mixer fitted with the paddle attachment, beat together the eggs and sour cream to blend. Add the stout-butter mixture and beat just to combine. Mix in the dry ingredients on low speed just until incorporated. Divide the batter evenly between the cupcake liners, filling them about ⅔ to ¾ full. Bake until a toothpick inserted in the center comes out clean, about 17 minutes. Allow to cool in the pan for 5-10 minutes, then transfer to a wire rack to cool completely.
3. To make the ganache filling, place the chocolate in a heatproof bowl. Heat the cream in a small saucepan until simmering, then pour it over the chocolate. Let sit for one minute and then whisk until smooth. If the chocolate is not completely melted, place the bowl over a double boiler or give it a very short burst in the microwave (15-20 seconds). Add the butter and Bailey’s and stir until combined.
4. Set aside to let the ganache cool until it is thick enough to be piped. (You can use the refrigerator to speed the cooling process, but be sure to stir every 10 minutes or so to ensure even cooling.)  Meanwhile, cut out a portion from the center of the cupcake using the cone method (a small paring knife works best for this). Once the ganache has reached the correct consistency, transfer it to a piping bag fitted with a wide tip and pipe it into the cupcakes.
5. To make the frosting, place the butter in the bowl of a stand mixer fitted with the paddle attachment. Beat on medium-high speed until light and fluffy, about 2-3 minutes. Gradually add the powdered sugar until it is all incorporated. Mix in the Bailey’s until smooth. Add more if necessary until the frosting has reached a good consistency for piping or spreading. Frost the cupcakes as desired.
« Chocolate Peanut Butter Cupcakes
Sausage Stars »