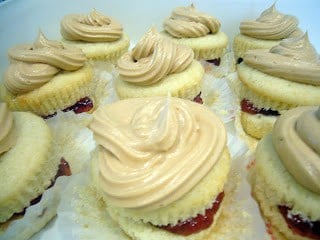 I received an awesome cupcake book last year or maybe even the year before for my birthday. I’ve made only two recipes out of it to date only because I’m not the biggest fan of baking, but since I got a new oven I’ve been a little more inspired to bake from scratch! I had been eying this PB&J recipe for a while now, and finally the time had come to step up to the plate and make these. Everyone who had them said they were even better than a normal peanut butter and jelly sandwich! Even if your not the biggest fan of baking from scratch I think you should step up to the plate like I did and give these cupcakes a try! I don’t think you’ll be disappointed with the end result!

Side Suggestions: cold glass of milk!