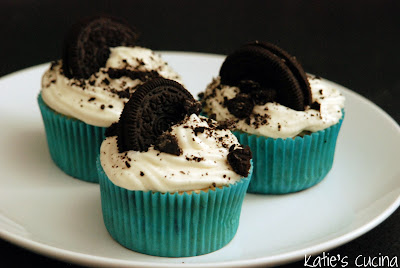 Anytime I know I need (or want) to make cupcakes I turn to the fabulous Annie’s blog; Annie Eats. Her cupcake recipes are by far the best I’ve ever had. I’ve blogged about her amazing Chocolate Chip Cookie Dough cupcakes and her Apple Pie cupcakes. Now, I have yet another amazing cupcake to write about! As soon as we received the invitation to our friends 30th surprise party I immediately volunteered for cupcakes. I knew that these would be a crowd pleaser, and as always, I  was correct!!! Although I’m not a big fan of oreo’s (gasp, I know–I’ve never had a love affair with this cookie like most American’s do) I was pleased with how they turned out. As one guest proclaimed “this is the most amazing cupcake I’ve ever had“. I on the other hand would much rather chow down on some chocolate chip cookie dough cupcakes. So as I handed off my half oreo to a friend sitting next to me I tried to enjoy the cupcake as a whole, and not think about the oreo’s. I was very pleased with the actual cake portion and the frosting tasted just like the middle of an oreo *sans one cup of sugar (way too sweet in my opinion). I hope you’ll bake these up the next time you have a special event in your life. Lastly, to my friend… Happy 30th Birthday! 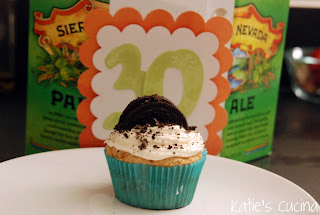