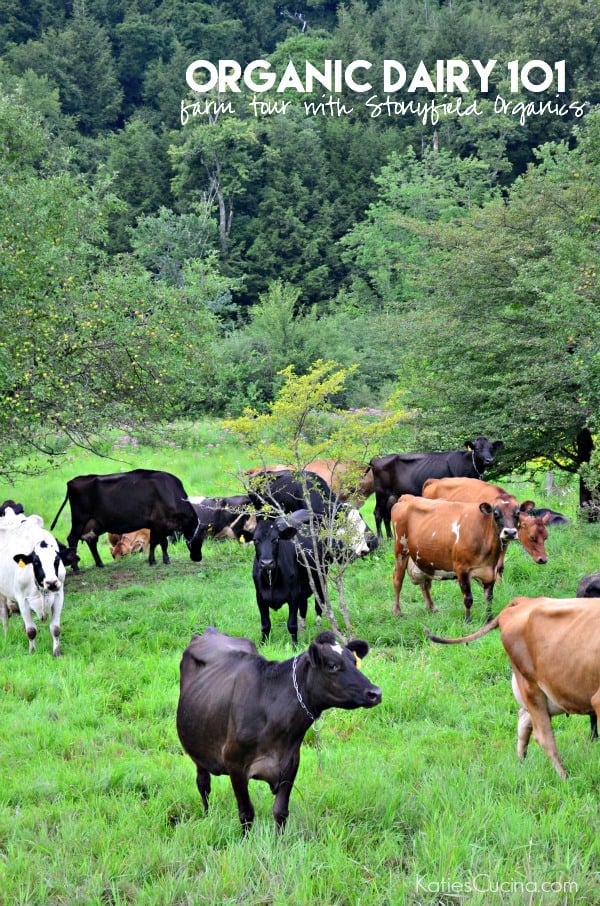 Back in July, my friends at Stonyfield Organics asked me if I wanted to spend the weekend with them in the New England region of the country touring a few of their many organic dairy farms. I jumped at the opportunity. The trip just so happened to be the week after we bought our new house (and in the thralls of home renovation). This was my first trip away from Ryder, but I knew it was an important one. Not just for the blog but for furthering my education about organic dairy. I’ll be honest, I saw this trip more for my family than for “work” at this point in my life. A few years back we started transitioning to purchasing more organic products. Once Ryder was born the transition intensified and once he started consuming dairy it was 100% organic. I knew that conventional dairy had toxic persistent chemicals that I didn’t want my growing baby to consume. Yes, I pay more for it, but I feel good about it and now after seeing the behind the scenes of organic dairy farming I will never ever complain about the amount of money I’m spending. There is so much work that goes into dairy farming in general, and when your an organic dairy farm there is even more work.

I thought about sharing all the in’s and out’s of our trip, where we ate, stayed, and the fun activities we did, but if you followed me on Instagram then you’ve already seen that. I really wanted to share what organic dairy farming is all about and why everyone should make the switch. It was beyond eye opening as a parent and a consumer. When I say this trip was life changing I’m not exaggerating. I wish everyone could go on farm tours like the one I went on. I think everyone would switch to organic dairy and in return the price of organic dairy would decrease because of the demand. And then more farmers would be switching to organic farming verse conventional. I would also like to remind you that I’m not an expert on this subject. Just like you, I’m still learning daily about organic verse conventional food production. My blog has always been an outlet to share information and that’s why I’m sharing this post about organic dairy farming today. I feel that it’s important for everyone to know and learn about. I really hope that everyone thinks twice before they reach for any conventional dairy products again.

I put together a video that highlighted parts of my trip from the various organic dairy farms we visited. 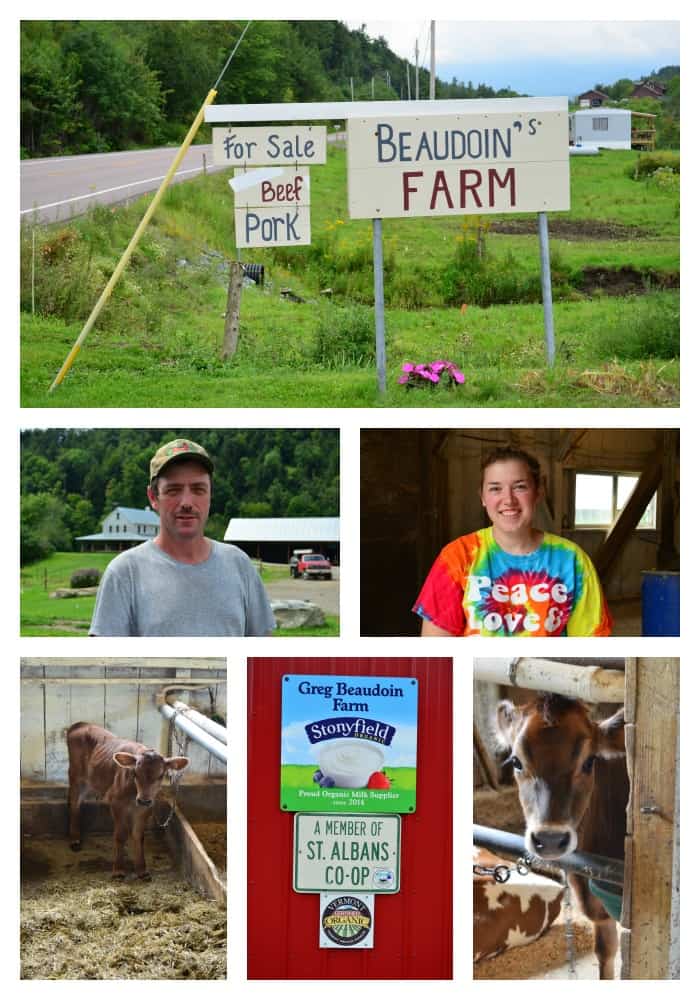 The first farm we visited during our “tour de farm” was Greg Beaudoin’s Organic Dairy Farm in Vermont. I’m going to be honest and say that I had no expectations going into this trip. I had no clue what to really expect. I’m a city girl–I’ve only been on farms a handful of times and really just most recently in the past five years during blogging. Greg, his wife, Kathy and their daughter, Ashley. The three of them farm together morning, noon, and night. If they take a vacation it’s 1-2 days off max a year. That’s it. So as your opening up gifts on Christmas morning they are freezing and taking care of their farm. They converted the farm in 2005 to organic. They have over 130 dairy cows (which for an organic dairy farm is about standard and considered a lot), and started shipping exclusively to Stonyfield Organics in 2014. Greg and his family also sell grass-fed beef for sale at their farm, and pork! I wish I lived closer because I would be buying from them all the time! 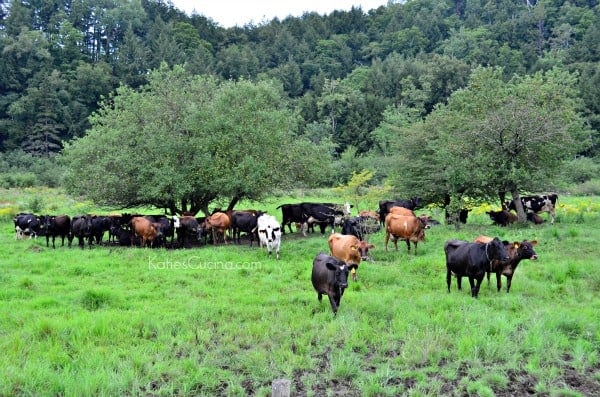 When you ask farmers why they converted to organic they all told us it was for the money. Which I found shocking but made sense. Then after most farmers convert they see how much healthier their cows are, and how they produce more milk. Organic dairy is sold at a much more consistent (higher) price where as conventional dairy prices fluctuate and are half of the sale price of organic.

Later that afternoon we visited Winsome Farm Organics located in New Hampshire. The views at this farm were spectacular! We arrived right before an afternoon thunderstorm. Glen and his wife have recently taken ownership of the dairy farm. Before them, Glen’s parents were the owners. They will eventually move on the farm and his adorable wife has big plans for the home and land! They are what you call “young” farmers. The family decided to go organic in 2004. Once again it was all about money. Now Glen is all about organic and realizes how much better it is for everything to be organic. For the farmer’s who sign on with Stonyfield they have access 24 hours a day to resources and education. Stonyfield isn’t just buying their milk, they are continuing to educate and support their farmers. This is not the normal thing that most companies do, but Stonyfiled wants the best for their farmers and the cows that supply their companies milk. Winsome Farms also sells meat and raw milk in their store. We had a chance to try the organic raw cow’s milk during our tour. I’ve never tried it before… I was a little scared to try it but decided to go for it because when else would I have the chance to try raw cow’s milk. So I did and it was amazing. Delicious. So sad that we can’t buy raw milk here in Florida. 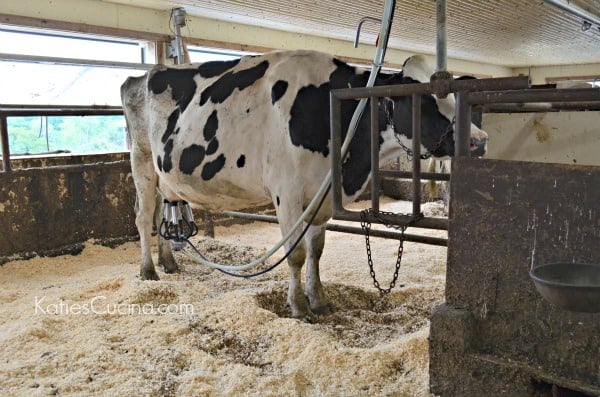 We got to watch first hand the milking process taking place. No hand milking here. We watched Glen and his staff milk the cows. We also had the opportunity to feel with our hands the suction. I honestly, don’t think I could have appreciated this tour had I not had a child. Coming from a breastfeeding mother who was also pumping on the trip, I could empathize with these cows. The milking machines sounded just like a breast pump. And the suction was very similar although much more powerful than a human’s breast pump. Just like humans, cows have to be milked a few times a day. Most of the time just twice a day, but could be milked 3-4 depending on conditions. 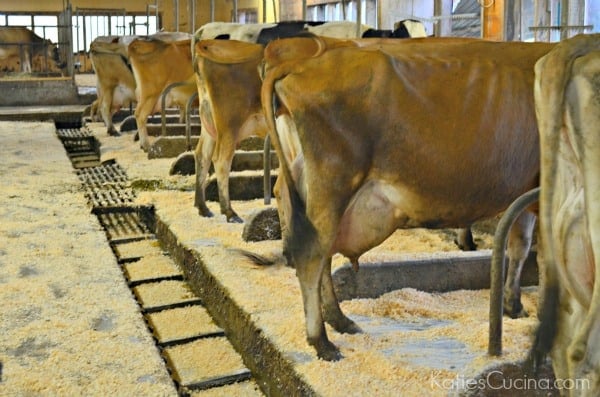 And just like women, cow’s can get engorged too. I took this photo of the cows to show how they are “engorged” and full of milk like human’s get when breast feeding. There was a lot of breastfeeding talk. I felt bad for Kristina and Maieread from Stonyfield–they do not have kids (as well as a few of the girls on the trip) and probably learned way more than they wanted to learn about breast feeding over the weekend! But seriously, dairy cows are just like us when it comes to producing milk. Maybe most people realized this–but I did not! 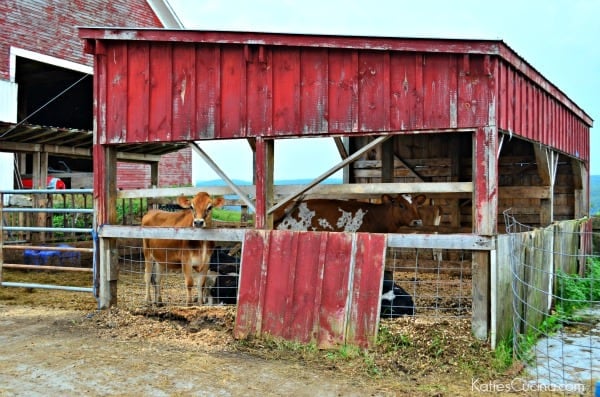 If this photo doesn’t scream dairy farm to you I don’t know what does. 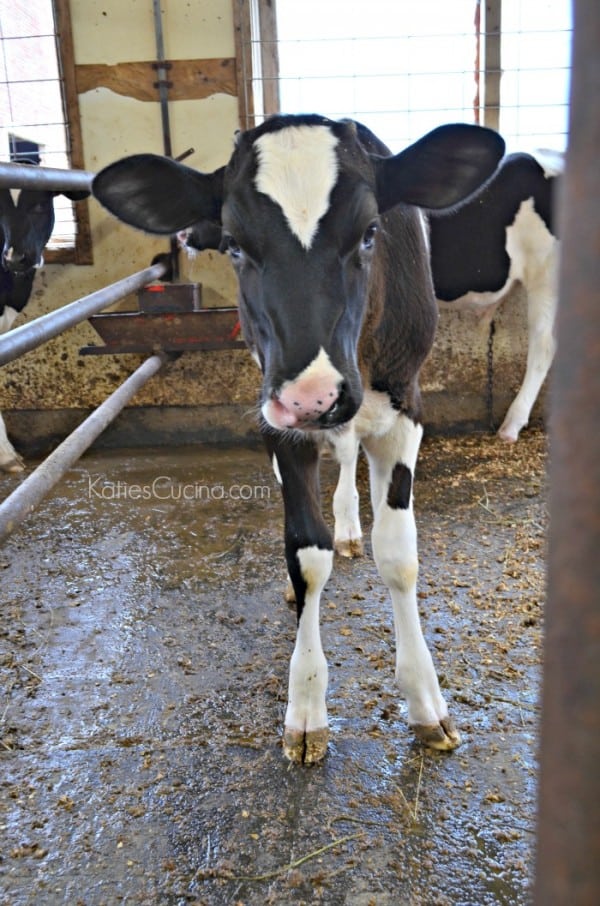 This was a baby calf we stumbled across. Did you know that cows can actually be a little mean to each other. When they are inside the barn they have to be tied up so that they don’t hurt one another. But most of the time they are grazing the pasture. Did you know that the average life-span of a dairy cow is only 4 years! Yep, that’s it. I was shocked. They have their first calves after their first birthday and that’s when their milk comes in, and then they start producing milk until they are inpregnanted again. They get a few months rest before they deliver and then back to milking. They typically have 2-4 rounds of this cycle. Organic dairy cows, tend to live a little longer than 4 years because they are much healthier. Once the cows can no longer produce dairy that’s when it’s time for the butcher. Sad but this is the circle of life that we live.

My friend’s at Stonyfield put together seven facts about organic dairy farming:

And you might still be wondering, like I did and many others on the tour, why some pesticides are aloud in organic farming. You can get all the info here. I hope you enjoyed learning all about why Organic dairy is so important to me, and if you haven’t made the switch yet just maybe this post will help solidify why you should.

Disclaimer: Stonyfield paid for my trip to their organic farms. I was not required to write about the trip–just wanted to share all the info I learned.