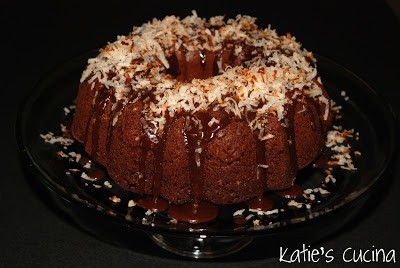 While planning the menu for my Thai Kitchen House Party the other week the first thing I honestly thought of was dessert. I was honestly concnerned. I never eat dessert when I go out to Thai restaurants and didn’t think that there would be too many desserts out there to make. Boy was I wrong! When I went on the Thai Kitchen website and clicked on “desserts” I found a variety of options. I’ll be honest I’m not a big fan of coconut but wanted to give this cake a try for a number of reasons. 1. It’s chocolate… you can’t go wrong with that. 2. It looked relatively easy to make (given the fact that I was going to be cooking a ton of food I wanted something that I could bake ahead of time and not have to deal with it on the evening of the party.
After reading the recipe in more detail I realized I needed a bundt pan. As soon as I realized this I started digging through a few of my cabinets. I received a bundt pan as a wedding shower gift back in May of 2008 and had never used it. I finally was given the opportunity to use it! I immediately got it out of it’s box, washed it, and was ready to start baking. I made the cake the night before my house party and then the chocolate glaze the day of. I will admit that the directions on the Thai Kitchen site were a bit confusing (and I didn’t realize that the ¼ cup of toasted coconut was suppose to go on top and not inside the cake until after I was on the last step the day of the party, so I’ve added it into my directions because it tasted delicious). I’ve rewrote the directions to how I feel they should read! The coconut is very subtle and the cake is  super decadent (even if it did come from a box). The chocolate glaze is what really makes this cake! Don’t skimp! On a side note; I did contemplate on making my own chocolate fudge batter, but I just ran out of time and a $1 cake batter mix was just going to have to work! I hope you’ll try this recipe out–it’s delicious!
*Make sure you enter into the Thai Kitchen giveaway.
Prep: 15 minutes
Cook: 35 minutes
Serves: 16
Cake Ingredients:

3. Bake 35 minutes or until toothpick inserted in center comes out clean. Cool in pan 10 minutes. Invert cake onto wire rack. Cool completely.
4. (The following day in my case) Prepare glaze by mixing sugar, milk and butter in small saucepan. Stirring constantly, bring to boil on medium heat and boil 1 minute. Remove from heat. Stir in chocolate chips and 1 teaspoon vanilla until chips are melted.
5.  In a small frying pan toast the remaining ¼ cup coconut. Spoon glaze over cooled cake. Sprinkle with toasted coconut. Let the glaze set onto the cake (I put the cake in the fridge for a few hours until the party).