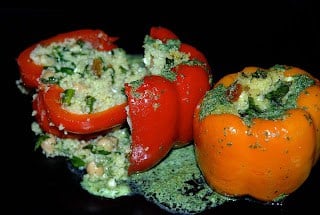 While lounging around the house last weekend I started to watch endless hours of Food Network–that’s when I saw Giada make this dish! My mouth was watering as soon I she started talking about it. I knew I had to try it. I was also intrigued to make this dish because I’ve never cooked with crème fraiche. I had to go on a hunt for the crème fraiche–I finally found it at Whole Foods. If you can’t find it though—don’t worry. You can take a ¼ cup of heavy whipping cream and a ¼ cup of sour cream; whip until well blended and fluffy and it will taste pretty darn close to the real thing. I made it this weekend and wowzas–this dish was amazing! My husband does not like couscous what-so-ever, but he will eat it for me… he was a little hesitant about this dish, but after the first bite he fell in love with it! I will definitely be making these again! Because this dish is so hearty you won’t miss meat in this  meal!